by Patricia Minch | Too Many Houses | 0 comments

After stopping a night or two at several smaller lakes, we headed for downtown Vancouver. Again, Mommy was embarrassed as Daddy pulled in to the loading zone right in front of the Hudson Bay Company. Passersby on the street kept their faces pointed forward but swiveled their eyes to stare, bemused, at our mud-spattered Plymouth and little brown trailer, its lumpy khaki tarp tied down with a rope. While ladies passing in and out of the store were dressed in suits, hats, white gloves, and high-heeled shoes, we looked like ragamuffins, Mommy said, like the poor refugees from Oklahoma who made their way across the plains to California during the Dust Bowl of the 1920s. But this was her only chance. She swallowed her pride and went inside and bought that special wool blanket that would warm their bed for thirty-five years. The rest of us waited quietly in the loading zone, all except Rusty, who wagged his tail and barked at the window whenever anyone came close.

From the Hudson Bay Company, Daddy drove straight to the waterfront and joined a long line of vehicles waiting for the one o’clock ferry to Nanaimo. After he paid our fare at the ticket booth, we walked over and ordered fish and chips at a little open-air restaurant overlooking the water.

“Isn’t this just beautiful?” Daddy said, thumping his chest as though he personally controlled the weather. It was beautiful, sunny and clear, puffy white clouds scudding along in the breeze while brightly colored boats crisscrossed back and forth across the channel, sails billowing. Daddy pulled the guidebook out of his pocket and read aloud how, all summer long, millions of migrating salmon used the Discovery Passage separating mainland British Columbia from Vancouver Island.  Accompanying the article was a picture of a Chinook salmon that weighed fifty pounds, almost as big as me. 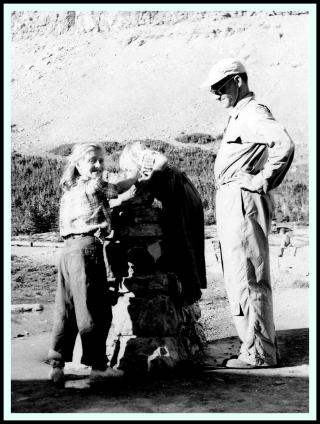 “Are you gonna catch one like that?” I asked Daddy.

The ferry came chugging toward us—several times the size of our house on Spaulding Avenue—sounding a shrill whistle as it eased into its berth, bumping gently against the black tires fastened there to cushion the impact. One by one, the cars ahead of us crept aboard and disappeared into the bowels of the ferry. When our turn came, we inched slowly forward and drove below. Daddy locked the car, and we climbed the steps to the observation level, where we could stand along the rail and watch the scenery during the forty-five-minute trip to Vancouver Island. It truly was beautiful.

From Nanaimo, Daddy drove north to a campground at the mouth of Campbell River, a place the guidebook dubbed “The Salmon Capital of the World,” where fishermen came from all over to rent boats and try their luck in the channel.

Seasoned campers by now, it didn’t take us long to unload the trailer and get set up. As Mommy poked around in the groceries, looking for inspiration, she looked over at Daddy and said with a wry smile, “I liked it better at Kootenai. Much better cooks.” He just grinned.

Eleanor and I wasted no time in checking out the campground. We took Rusty, too. If you had a dog on a leash, kids would come right up to you and make friends. We found two girls jumping rope, but because there were only two of them, they’d tied one end of the tope to the bumper of their car so one could turn the rope while the other one jumped. The bumper wasn’t high enough, though, and the rope kept hitting the jumper in the head.

As soon as they saw us, they came running over to pet Rusty, and pretty soon we had two new friends, eight-year-old twin sisters whose family had come all the way from Missouri for the salmon fishing at Campbell River. The next day, the four of us explored every nook and cranny of the campground, but we only saw a couple of teenage boys. Ugh! Besides jumping rope, we played hide and seek and went swimming at the beach that was part of the campground. But we spent the most time at the twins’ campsite because their mother had brought at least a ton of cookies and candy from Missouri.

All week long, Daddy’s routine didn’t vary. He got up at dawn, made himself a thermos of coffee, launched his rental boat, and joined dozens of other eager fishermen in what looked like a circus parade. They’d putt-putt-putt slowly out into the channel, form a line three boats across, and patiently troll around in a huge, ragged circle. If one of them hooked a fish, he’d yell, and the rest would reel in their lines and watch and cheer as the lucky fisherman fought his salmon. When there wasn’t any action, the men drank their coffee and talked back and forth, telling tall tales of the monster salmon they’d caught in those very waters a month ago—or a year ago—or never. About nine, they’d all return to shore. The successful would clean and fillet their fish and pack them in ice. Around four in the afternoon, the men would launch their boats again, head out into the channel, and troll ’round and ’round until after sunset.

Daddy caught several salmon, but nothing approaching fifty pounds, or even thirty. Mommy didn’t fry the salmon the way she did trout. Instead, she topped the fat fillets with lemon slices, sprinkled them with salt and pepper and paprika, then wrapped them in aluminum foil and let them cook on the grate of the barbecue pit at our campsite. I’d never tasted salmon before and had to admit it was pretty good. Not as good as trout, though.

Daddy took one day off from his fishing schedule to drive us to Victoria, where we had high tea at the Empress Hotel, an experience the guidebook said we shouldn’t miss. He had to do some fast talking to get us in, though, because we weren’t “properly dressed.” I think Daddy slipped the clerk at the door some money or something because he finally allowed us in. “But only because it’s a weekday,” the man assured us as he stuffed several one-dollar bills into his pants pocket.

Soon it was time to pack up and head south. Before we left Campbell River, Daddy spread his map out on the table. “Hey, Lil,” he said, “how’d you like to see Crater Lake on the way home? It’s a little out of our way, but I think we could make it.”

There wasn’t much point in answering. Once Daddy got a bee in his bonnet about seeing something new, no one could change his mind. Mommy just shrugged her shoulders. “Sure,” she said. “Why not?”

Daddy began packing so we could get an early start.

The next day was a very long one, more than 400 miles. We camped in Roseburg and again got up very early for the drive to Crater Lake. What I remember most is feeling carsick on the way because of the sharp curves in the road. It was worth it, though, to see the lake, a gorgeous sapphire-blue circle with one island in the middle—well, not exactly in the middle. The guidebook said the lake was the crater of a huge volcano and Wizard Island was a volcano within a volcano. The guidebook also said visitors could take a boat out to hike on the island or hike all day around the entire rim of the lake. We could tell Daddy was disappointed.

“We’ll just have to come back,” he said. “Maybe I can get a couple of days off before school starts.”

Instead, he bought a big bag of peanuts so we could feed the chipmunks. They were so tame they’d come right up and eat out of our hands. Rusty had to stay in the car because he would have gone wild chasing the chipmunks, as much fun as cars and cats and chickens.

The trip home was the longest day of driving I can ever remember. In the afternoon and again in the evening, Eleanor and I took turns sleeping in the backseat while Mommy held Rusty on her lap in the front. Mommy even drove partway so Daddy could rest, but when Mommy drove, Rusty had to stay in back with us. He never, ever sat on Daddy’s lap.

It was past midnight when we finally pulled up in front of 2104 Spaulding Avenue. Not a single neighbor was awake to welcome us home.

Author: Patricia Minch, Writer, etc. Growing up an “Army Brat,” by age eighteen I had lived in nineteen different homes in half a dozen states, Europe, and the Far East, and had traveled extensively beyond those. A National Merit Scholarship finalist in 1958, I attended the University of Texas, El Paso, and the University of California, Berkeley. Years later, I took additional courses at Cabrillo College in Aptos, California, and then spent thirteen years as a self-employed editor for court reporters. An avid writer, genealogist, gardener, landscape designer, amateur architect, woodworker, and antiques collector/dealer, I am also wife, mother, and grandmother. I’ve written feature articles for local newspapers and recently completed my first book, a narrative non-fiction account of my father's experiences as a guerrilla in North Luzon (Philippines) during WWII. I currently live with my husband, a retired college instructor and Air Force veteran, in Northern California.